Unfortunately no chance for photos on this first day.

And back to Lisboa.

Again at Zurich but not so good weather this time. We were parked between... And boarding started for this SWISS. 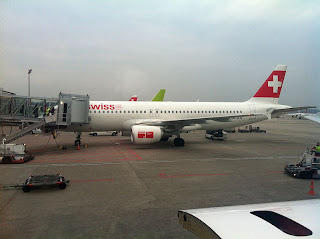 After its pushback, the airBaltic was finally visible. 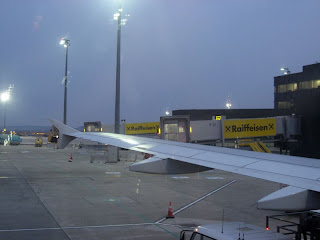 Some photos of another roundtrip flight just before Christmas Eve.

Overflying some mountains covered in snow... 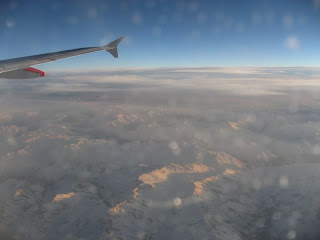 And finally after arrival at Vienna International Airport (Schwechat) on a foggy day, 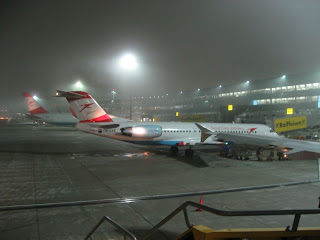 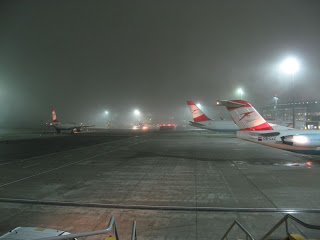 And now looking at the tail of our aircraft, reg. CS-TNH, "Almada Negreiros". 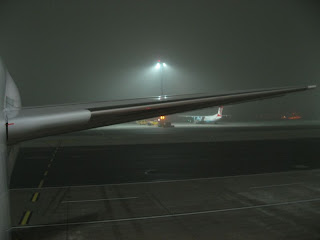 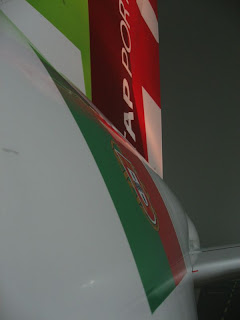 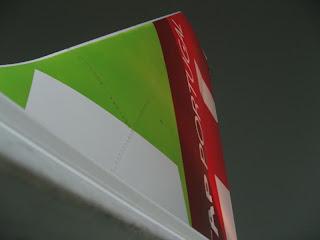 Email ThisBlogThis!Share to TwitterShare to FacebookShare to Pinterest
Etiquetas: VIE

Unfortunately there are no layovers at Oslo, another Scandinavian city that I'd like to visit... Here are some photos taken at the airport during a turnaround while the catering was being loaded. 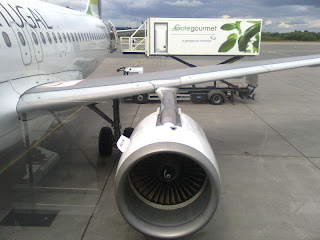 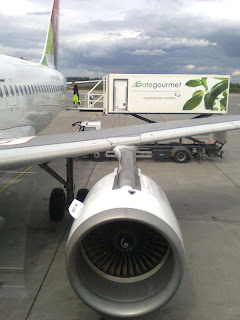 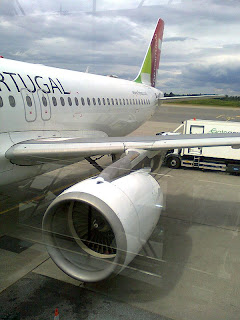 Email ThisBlogThis!Share to TwitterShare to FacebookShare to Pinterest
Etiquetas: OSL

I was more than a month without flying so I didn't expect anything new for this day although I was perfectly aware that my first solo flight would be near.

After some weeks of awful weather I was able to fly again yesterday. A local flight at Cascais Aerodrome was previously agreed with my instructor. Most probably, we would remain on the traffic pattern.

The aircraft booked for that flight was an old but strong Cessna 152 with reg. CS-ASO.

The weather was great... few clouds and the sun was shining. There was some wind but nothing special. I filed the usual flight plan for a local flight with a EOBT at 1450Z.

After my C152 was filled up with fuel I started the pre-flight inspection and it was when my instructor arrived. To me, the aircraft seemed pretty much beautiful for another safe flight, so I just had to wait for the EOBT and in the meanwhile took some photos of her. 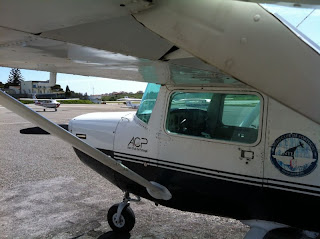 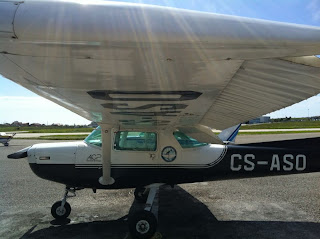 Engine start-up was at 1500Z, runway 35 was in use and we were instructed by the ATC to taxi to its holding point.

During the "Before Take-Off" checks, only the Attitude Indicator was not working properly although the suction gauge was well within the green arc. But for a local VFR flight this instrument is not really needed. Attitude flying with reference to the natural horizon is a thing I learned since the very first flight.

After flying 6 circuits I felt comfortable handling the airplane and doing every procedure. My instructor thought it was time for me to fly alone so he requested a "stop and go". I don't know if he read my mind but for me it was also the first time I felt safe and confident enough for that moment.

When we were stopped at the taxiway and with the engine running, my instructor got off the airplane telling me to do one touch and go and another circuit for a full stop. He made me remember that the aircraft would be lighter and perform better without him on board and advised me to "go around" if any difficulty would come up during landing.

I took one minute doing a silent review of all the procedures before I contacted the ATC again to request taxi. For the very first time I was alone being the Captain of my own plane.

As I taxied to the holding point of runway 35 I lowered the flaps to 10 degrees. I changed from Ground to Tower frequency stating "ready for departure".

"CS-ASO, Cascais Tower, behind the landing traffic line up and wait behind". A Tecnam P-2006T landed and I lined up waiting for the take-off clearence. While waiting for it, that big runway with almost 1400 meters, seemed to me a gateway to freedom.

I think the moment when I opened the throttle to full power I completely merged with the aircraft into a single body. "Airspeed alive" and "60 knots, rotate" were my silent call outs during the take-off run. The speed built up very fast and that was the first noticeable difference with the aircraft being lighter. After liftoff and when I started climbing at a speed of 70 knots, my first thought was: "Yes, I did it! I don't even have to wait for the landing to know that I will be successful because I will put this damn thing on the ground and I will be ready to take-off again!"

Keeping concentration on the procedures and communications, everything seemed to flow naturally and automatically. At 600 ft I raised the flaps, trimmed the aircraft to keep 70 knots and turned off the landing light. At 700 ft I turned left for the crosswind leg and I the leveled the aircraft at 1000 ft at the same time I turned to the downwind.

"Cascais Tower, C-SO on left downwind for touch & go". I was informed I was number 2 and I immediately looked out for the other aircraft while perfectly keeping 90 knots at 1000 ft and flying parallel to the the runway. It was easy to find the other aircraft and abeam the runway 35 threshold I started reducing the throttle and lowered the flaps to 10 degrees. As the other aircraft passed by me on its final, I closed the throttle a little bit more, applied the carburetor heat, flaps 20º and started another turn to the base leg at the same time I was already descending. Just before turning to final, flaps 30º and landing light on. I made a little adjustment in the throttle setting to make the airspeed 60 knots for the final approach.

I think I saw a queue of 2 or 3 aircraft on the taxiway waiting for their take-off. Maybe they were seeing what I was doing but I didn't care much about them. It was to myself that I had to show something. Tower reported wind calm and I was cleared to land. I was perfectly stabilized on the glide path, keeping a nose-down attitude and 60 knots. And guess what... my best landing ever!

Full power, carb heat off and flaps to 10 degrees: let's do it one more time! I felt I had time to do everything without being in a hurry and I was not running behind the aircraft at all. Even when I had some difficulty to find a "slot" in the frequency to report I was on the downwind for a full stop, I remained perfectly calm. This time I was number 3. Again, it was almost immediately that I found the two other aircraft and kept visual contact with the number 2. When on short final - 60 knots on the glide path and avoiding unnecessary corrections because the aircraft knows the way to its home better than me - I was still without the landing clearance and I think it was the only moment when I felt some anxiety. I was about to report I was on short final when the tower finally gave me the clearance. This second landing was not as good as the previous one, but definitely also a good one. The proof is that CS-ASO took off again that afternoon with another student pilot!

As I vacated the runway I thanked the ATC for their help and they gave me congratulations for my first solo flight! When entering the apron, my instructor was waiting for me and acting like an aircraft marshaller helping  me parking the aircraft. He made me a sign to turn off the landing light which I think it was the only thing I forgot to do during the whole run. Mixture cut-off made the engine shut down and then beacon light, magnetos and master switch all off: success! Only my head was still flying and took a long time to land, maybe just when I fell asleep that night. Definitely, a day that I will never forget.
Publicada por LisbonJet em 6:52 PM No comments:

Email ThisBlogThis!Share to TwitterShare to FacebookShare to Pinterest
Etiquetas: CAT

Night out in Accra

Friday night at Bella Roma: music, lasers and beer! We did not go crazy till we saw the sun but it was a nice time we had. 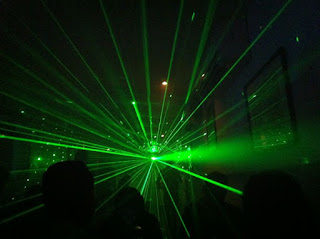 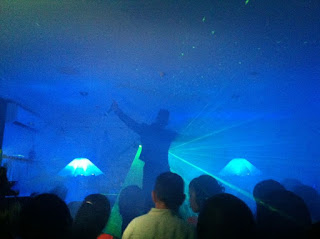 This was a rather short layover. On saturday I had lunch by the pool but the sun did not show up which ruined what would have been a perfect tan. Temperatures were around 30º C or more which was nice.
Publicada por LisbonJet em 8:18 PM No comments:

Email ThisBlogThis!Share to TwitterShare to FacebookShare to Pinterest
Etiquetas: ACC

It looked like spring in Freising...In fact, temperatures were around 15º C. 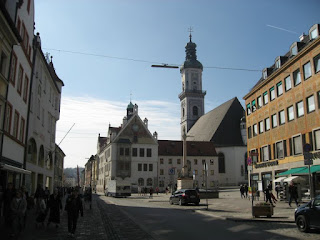 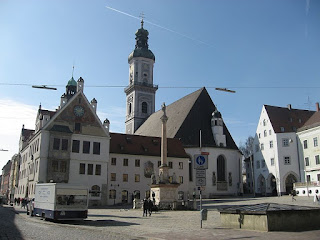 Still, some signs of recent snow... 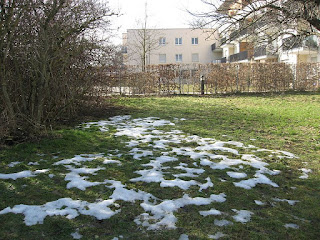 In the afternoon, time to go to Munich and have lunch at HB Hofbräuhaus. 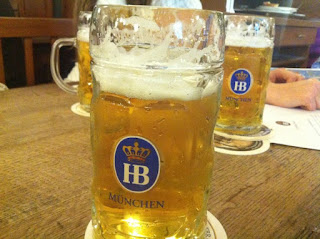 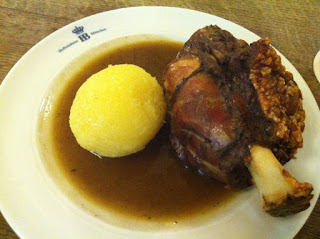 I must admit I was a little bit skeptical but in the end it proved to be very tasty ;)
Publicada por LisbonJet em 10:22 PM No comments: