My first crossing of the Equator

TAP Air Portugal used to have two types of diplomas for passengers doing their first flight or for those celebrating the first crossing of the Equator.

I have this one for my supposedly first flight:

But I always knew this was only my first crossing of the Equator and not the first flight. My first flight ever was between Lisboa and Porto (confirmed with my parents) still in the same year I was born! I still have the ticket although not much information about the exact date or even the flight number. The corresponding boarding pass apparently didn't survive as I can't find it in my archive.

But because of my passion for the L-1011, I always felt more curious about the details of the first transatlantic flight. Although I was confident it was a L-1011, I couldn't rule out the possibility of the flight being operated by a Boeing 707. The L-1011s entered in service early that year. I made my first attempt to figure out what airplane operated that flight based on the 1st August 1983 date. But no evidence was found in the archives of TAP for that particular day.

Some years later I found the boarding pass of the return flight from Recife. The date of it was handwritten on its back by my mother: 01/09/1983. It was when I started putting in doubt the date of the diploma. Hardly my mother would write a wrong date on the boarding pass and I confirmed we never spent holidays one month long in Brazil.

I insisted with my parents to give me more evidence or clues about the real date of my first Equator/Atlantic crossing and it was when our family passport from that time showed up. Analysing the passport stamps I finally found everything I needed for an accurate investigation. Not only the return date was confirmed but I finally had a more plausible date for our departure: 24/08!

So I only had to pray that the correspoding Journey Logs were in the possession of TAP. I was lucky! And I was also happy to confirm my almost umbilical connection with the L-1011:

Yeah! It was the very first TAP's L-1011, the beautiful TriStar 500 named "Luís de Camões" which I clearly remember of being on board of it some years later - those days, TAP flight attendants used to say the name of the airplane during the welcome announcement so that one was easy to retain even if I didn't care about tail numbers.

Because of the logged date being 25/08 and the departure stamp having 24/08, I was in doubt if there was a chance of another flight the day previous day which was not found in the logs. But the arrival stamp at Brazil which is almost faded, dissipates any doubt. It was really this flight which departed already after midnight.
It was the 100th entry of the second Journey Logbook of CS-TEA:

For the return flight the following data was returned:

The tail number CS-TEB was the second L-1011 delivered to TAP and it was named "Infante D. Henrique". It was the last L-1011 flying in Portugal and also the last civil passenger aircraft of the type in Europe.
This flight was found in the 45th entry of the second logbook of CS-TEB:

Ironically I got this information very recently at the same time I was doing a LIS-REC-LIS rotation! This time it was like this:

I was happy to finally solve this mystery. Of course I don't have memory of any of these flights. But I have the memory of many other L-1011 flights with TAP that followed during the 80s and the 90s.

I know my first flight ever was in September 1982 (staff tickets were open tickets). Probably on a Boeing 727, another great trijet and also one of my favorite aircraft types. But I guess I will never be able to sort it out!
Publicada por LisbonJet em 9:39 PM No comments:

Another flight to Luanda just before Christmas

It's amazing the way time flies together with you. I really don't care about it. While in my twenties one year felt like an eternity, today 10 years look like it was yesterday. Maybe it's an age thing or it is just the consequence that I'm having a great life. When things are good the sense of time contraction contradicts the Lorentz transformation which says for a fast moving object you experience length contraction (true, because in aviation we shorten distances for those who travel) and time dilation (not true at all!). And this also means that after so many years since I left university I still know how to be a nerd!... and yes, I know I fly too slow compared to the speed of light to experience any of those phenomena :) And because I'm getting younger in spirit, I really want to return to university in the medium term.

But it is amazing to realize that it was 9 years ago that I first flew on a A340 to Luanda, although in very different circumstances. And the funny fact that I finally had the opportunity to know one of the crew members of that flight that I clearly remember. And the airplane... the  same tail number, CS-TOA. Coincidences...

When flying on the good old A340, I feel like flying on the wings of my own history. In 1987 or 1988, I was a little boy when I first heard my dad telling me that TAP would buy a new four engined aircraft from Airbus. Since I always loved airplanes (I don't recall any period of my lifetime when that didn't happen) it was important news for me. Despite the L-1011 being my favorite (and it still remains!), as an airline brat I wanted my airline to have the biggest and most modern airplanes of the market. It was a pride thing, common to every airline brat.
TAP took delivery of its first pair of A340s in 1994 (they're going to complete 22 years of service within the next few days) and the first time I was near one was in 1996 inside our main hangar at Lisbon Airport. With my father's retirement that year it was difficult for me to get on board the brand new acquisition and it was only in 2007 that I managed to fly on a A340. I was only 5 years old when TAP announced their order for the new long haul flagship. I was far from imagining that they would become four of my flying offices. They're old now and many of my colleagues hate them (mostly because they don't have bunks). I love them... I love vintage aircraft! I really can't repel my aviation enthusiast side.

Our flight to Luanda, despite some turbulence over the African continent, had nothing special to tell about. It was a night flight arriving at Luanda early in the morning. Some photos I took already at "4 de Fevereiro" International Aiport: 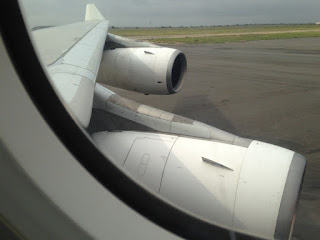 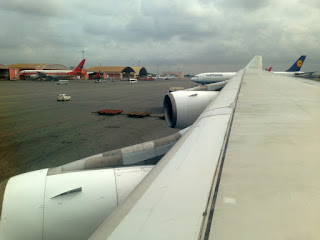 I spent the whole day sleeping because I didn't have opportunity for a decent rest in the previous afternoon just before the flight.

I took the opportunity of this layover to have dinner with a good old friend now living in Luanda. The restaurant Zen It Esplanada Lounge in Talatona was the chosen venue for our dinner. Very good food although expensive... like almost everything in Luanda!

One very strange thing for us born and leaving in the Northen Hemisphere is to see Christmas decorations set in a warm summer environment. It just doesn't make sense! But of course everybody deserves the opportunity to celebrate the Holy Season and the hotel where I stayed was no exception. 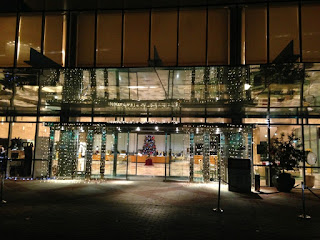 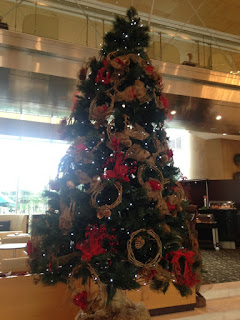 After dinner I had the very difficult task to fall asleep again considering I woke up around 5 pm, local time... Fortunately our pick up time was a decent one, at 7:55 am.

Soon it was time to return home. There's no better feeling, believe me! Again, CS-TOA was the airplane for our flight. Just before boarding I witnessed the engine start-up and taxi-out of a beautiful and also veteran MD-11F flying for Western Global Airlines.

This MD-11 was previously owned by Nordic Global Airlines, the cargo branch of Finnair that ceased operations in 2015.

About our flight, not a single seat was left when boarding was complete. It would be a demanding flight but we are there for that! No significant turbulence this time but we had to help a little kid that was feeling sick and fevering. His mother was worried about the inherited sickle-cell disease and the fact that we were inside an airplane pressurized to a level well bellow the atmospheric pressure at sea level. Fortunately everything went fine until the end of the flight and he got proper assistence from a paramedical team upon arrival.

This was a totally unexpected but very welcome layover in Prague. It was my first one, so let's czech it out!

Early in the morning we decided to start our tour with the castle. Although the direction signs are in Czech, the text is always accompanied by illustrative pictures that make it easy for the tourists to find their way to the landmarks.

We can get a stunning view of Prague up in the hill just before entering the castle: 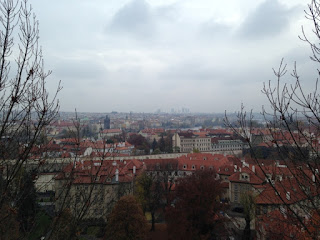 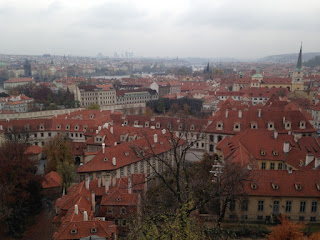 It is free to get inside but you have to pass through a security control. Inside the castle everything is so beautiful that made me remember that this type of beauty and architecture can only be found in the Old Continent. 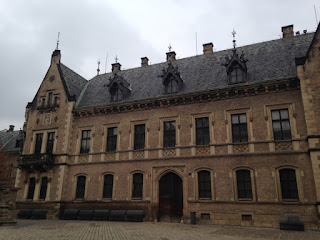 
So let's have a closer look to the impressive Gothic Cathedral inside the castle complex! 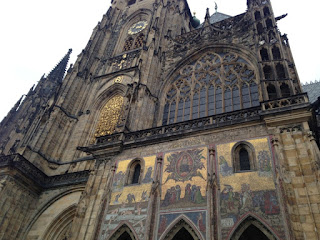 This glass mosaic depicting the Last Judgment has an area of about 80 m2! Wow, more than the area of my humble apartment!

It is possible to climb to the top of the main tower but you have to buy a ticket.

We can go inside the cathedral and stay there in a delimited area. Beyond that area, you have to pass through a ticket gate. 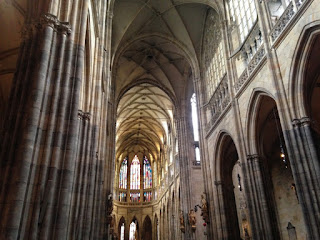 We can see some awesome stained glass! 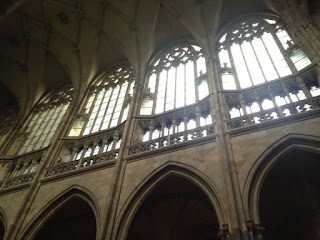 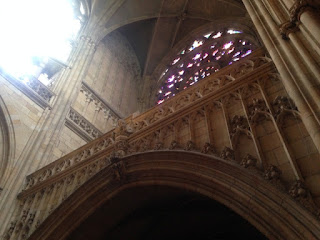 And now back to the outside... Some very strange gargoyles! Well.. they're strange by definition. 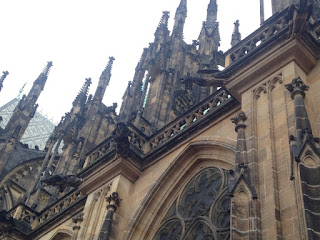 And finally leaving this beautiful castle. 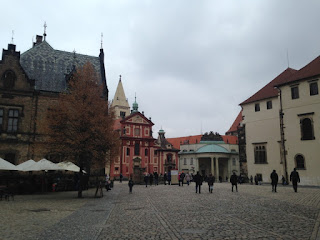 The next landmark we wanted to visit was the famous Charles Bridge (in Czech, Karlův most) and go back to the Old Town to have lunch. 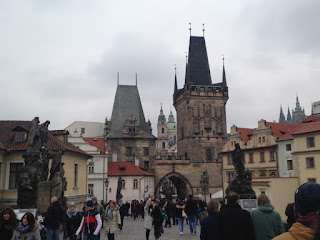 Some views of the Vltava River: 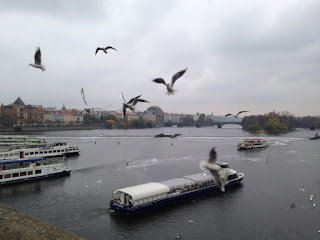 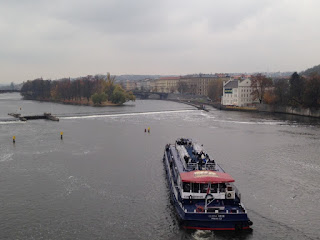 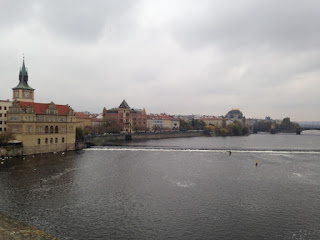 
Back to the Old Town we chose Hotel Lippert Restaurant for our lunch. I went for the typical goulash soup and roasted duck with red and white cabbage!

The medieval astronomical clock is one of the main attractions in Prague. Unfortunately the daylight was already fading which prevented me from taking better photos of it.

In very few minutes, it was completely dark. It was really cold and we noticed some very, very light snowfall. 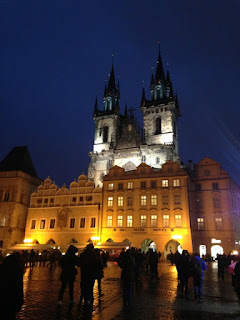 And soon  it was time to go back to the hotel. Unfortunately I didn't have the opportunity to visit the New Town and the famous Dancing House. But I hope to be back in Prague somewhere in the future.


The next early morning we experienced a more decent snowfall on our way to the airport. 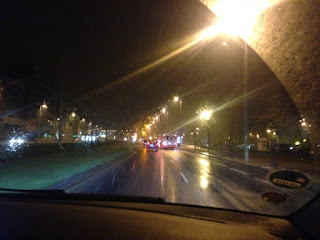 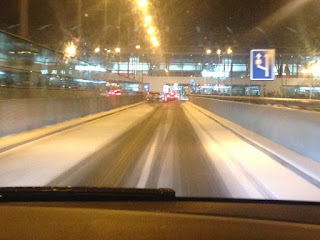 OK, I find snow beautiful because it's not usual where I live (I've seen snowing in Lisbon only once) but it has a little inconvenience for those who are going to fly: de-ice will be needed! Some photos I took aboard our Airbus named "Malangatana": 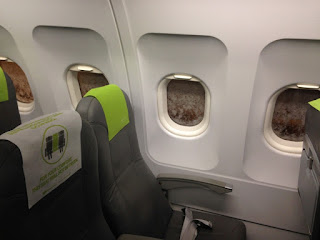 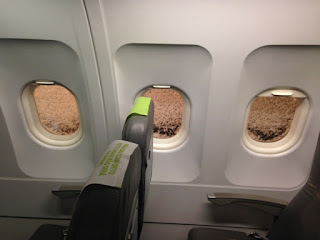 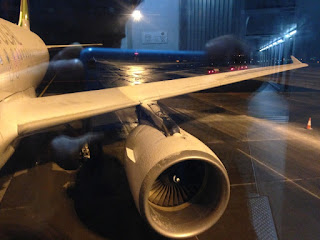 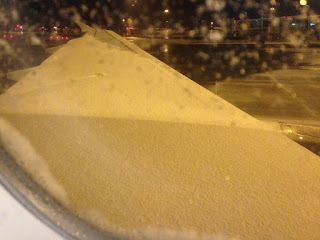 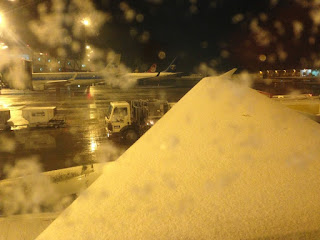 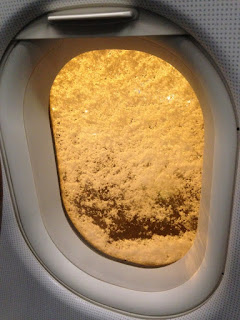 A short video of a little walk through the cabin:

We managed the situation and finally took off to witness a wonderful sunrise already over the Alps!